If the last year has taught us anything, it’s that major biological threats can emerge seemingly out of nowhere, causing death and disruption on a global scale. We watched the international scientific community combine all its forces to quickly and effectively mount a response to the novel biological threat of SARS-CoV-2. Key to that response was the immunization of animals, enabling the generation of reagent and therapeutic antibodies as well as development of vaccines. It was an accelerated, and very public, demonstration of the power of in vivo antibody generation that has been applied to discover therapies for cancer, autoimmune diseases, and other ailments.

When it comes to antibody discovery, the ethics of the research performed are just as important as the methods employed. Antibody Solutions takes the welfare of every animal used in its immunization programs seriously. Numerous safeguards are in place to ensure the humane and judicious use of animals.

Last year, the European Union Reference Laboratory for alternatives to animal testing (EURL ECVAM) released a recommendation on non-animal-derived antibodies. The 70-page report argues that "non-animal models have progressed to such a degree of efficacy that they can either replace or out-perform traditional animal models." Based on this assertion, the recommendation states the following:

EURL ECVAM recommends that animals should no longer be used for the development and production of antibodies for research, regulatory, diagnostic and therapeutic applications. The provisions of Directive 2010/63/EU should be respected, and EU countries should no longer authorize the development and production of antibodies through animal immunization, where robust, legitimate scientific justification is lacking.

While the EURL ECVAM Recommendation does not propose or impose a ban, it states that, based upon the EVCAM Scientific Advisory Committee (ESAC) Opinion and a Working Group report, “no scientifically justified exceptions could be identified." Thus, while not explicitly proposing or imposing a ban, the ESAC opinion appears to call for one. The Recommendation seeks to further promote non-animal antibodies by controlling funding for, manufacture/supply of, use of, and reporting the results of animal-derived antibodies.  Perhaps the most scientifically chilling proposal is that editors and journals are advised to adopt policies of “not accepting manuscripts with data generated with animal-derived antibodies."

It is important to note that scientific justification is already included in all protocols for the care and use of laboratory animals. The ESAC Working Group, making the determination that “no scientifically justified exceptions could be identified,” is comprised, in part, with ad hoc committee members, who are proponents of synthetic antibody platforms. They have disclosed their conflicts of interest from funding sources, employment by, or stock ownership in, synthetic platform companies through the Register of Commission Expert Groups. However, their potential conflicts of interest are not disclosed in the recommendation.

The EURL ECVAM Recommendation has garnered a response from multiple scientific institutions. The American Association of Pharmaceutical Scientists (AAPS, the European Federation of Pharmaceutical Industries and Associations (EFPIA), and the League of European Research Universities (LERU) are among the institutions that have expressed concerns regarding the Recommendation. For reasons detailed below, Antibody Solutions shares many of the same concerns as these institutions.

EURL ECVAM is an integral part of the Joint Research Centre (JRC), the science and knowledge service of the European Commission. The JRC’s stated goal of reduction, replacement and refinement ("the 3Rs") of animals in research, has, in some ways, already been realized. Many processes such as hybridoma generation are already mostly animal-free, with only the initial immunization requiring an animal component. Next Generation Sequencing (NGS) and single B-Cell sequencing allow for more information to be gleaned from each animal-derived sample, greatly reducing the number of required animal subjects. In vitro antibody production has been used for many years as a replacement for ascites production in mice. Antibody Solutions was a pioneer in the push to replace ascites with in vitro production methods.

The process of antibody generation in animals uses biological processes that can’t be replicated with synthetic library technologies. Affinity maturation in animals, a complex process involving antigen-presenting cells and T-Cell help, drives antibodies to high specificity and affinity. This process also eliminates auto-reactive (e.g., anti-host) antibodies and antibodies that cannot be stably produced by mammalian cells. A case study compiled by the EARA/EFPIA comparing immunized alpaca with synthetic libraries for COVID-19 found that, even after a lengthy process of affinity maturation, a synthetic library could not match the affinity level of the animal-derived nanobodies.

For therapeutic antibody discovery, each side can point to successes of animal vs. synthetically generated antibodies. They have both generated useful drugs, making them both important pieces of the same puzzle. However, more than 90% of the antibodies approved by the FDA for therapeutic use have been derived from animals (see chart below). Animal-derived antibodies have grown at a faster rate than those from synthetic human libraries. This is not due to limited use of non-animal synthetic libraries for antibody discovery: Synthetic libraries have existed for more than 30 years, and there are many academic and commercial practitioners.

Still, a big gap remains. Approvals of antibodies from human antibody expressing transgenic mice are higher and have grown at a faster rate compared to synthetic libraries, even though transgenic technology is newer and the first approved antibody was years later than the first synthetic library antibody approval. 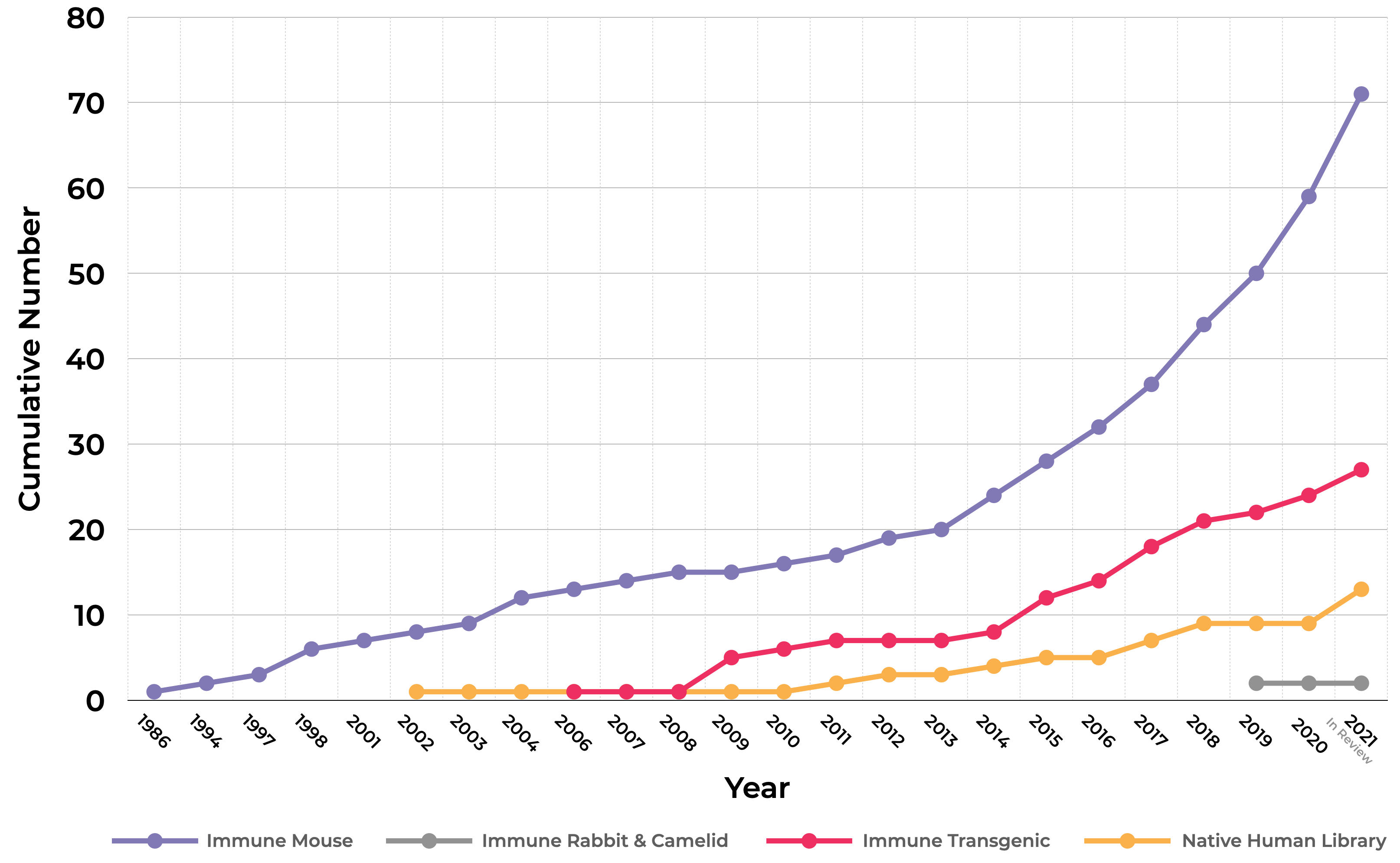 Because there is still a lot that non-animal antibody technologies can’t do, the EURL ECVAM’s Recommendation is founded on a limited representation of the strengths and weaknesses of different antibody technologies. Synthetic antibodies may conceivably replace immunized mouse and rat antibodies in some cases. However, they do not offer a complete replacement yet.

Innovation and regulation can work together to ensure that life-saving therapies can be delivered while still adhering to the 3Rs. The humane care of animals in research we conduct for our clients at Antibody Solutions is one of our top priorities. Our company strictly adheres to all federal guidelines issued by the National Institutes of Health’s Office of Laboratory Animal Welfare (OLAW) as well as all applicable state regulations. To help fulfill our commitment to humane care, we have an Institutional Animal Care and Use Committee (IACUC), which monitors and oversees our animal program.

Simply put, full, immediate implementation of the EURL ECVAM Recommendation would likely cause significant damage to biopharma research. The pursuit of the 3Rs should always be regarded as a foundational component of our industry’s guiding principles, but an attempt to replace all animal-derived antibody technology at this juncture could be nothing short of disastrous for drug and vaccine discovery and development.

It would jeopardize the generation of new, beneficial therapeutics and vaccines discoverable only through animal immunization. Opportunities for innovation could be lost. These include discovery of synthetic alternatives not yet available for antibodies derived from chicken, camelid or rabbit immunizations. Censoring manuscripts containing data generated with animal-derived antibodies would stifle scientific knowledge. Retrofitting and retraining for synthetic library-only research would be a hurdle for any bio-scientific organization and slow the discovery of new useful antibodies. The likely result would be fewer organizations pursuing fewer therapies, with fewer candidates and longer lead times.

We all look forward to a day where the need for animal-based research has been eliminated by the advent of a broad range of synthetic alternatives. But animal-derived antibodies are still a vital part of the biotechnology landscape and will be for some time. Immunization of animals for antibody discovery endures for the same reason that it remains so ubiquitous – because it works where non-animal alternatives do not.

We'd welcome an opportunity to continue this discussion and hear your thoughts on this important issue facing the biopharmaceutical sector. Please get in touch with us when it's convenient for you.

Thank you, and best wishes for good health! 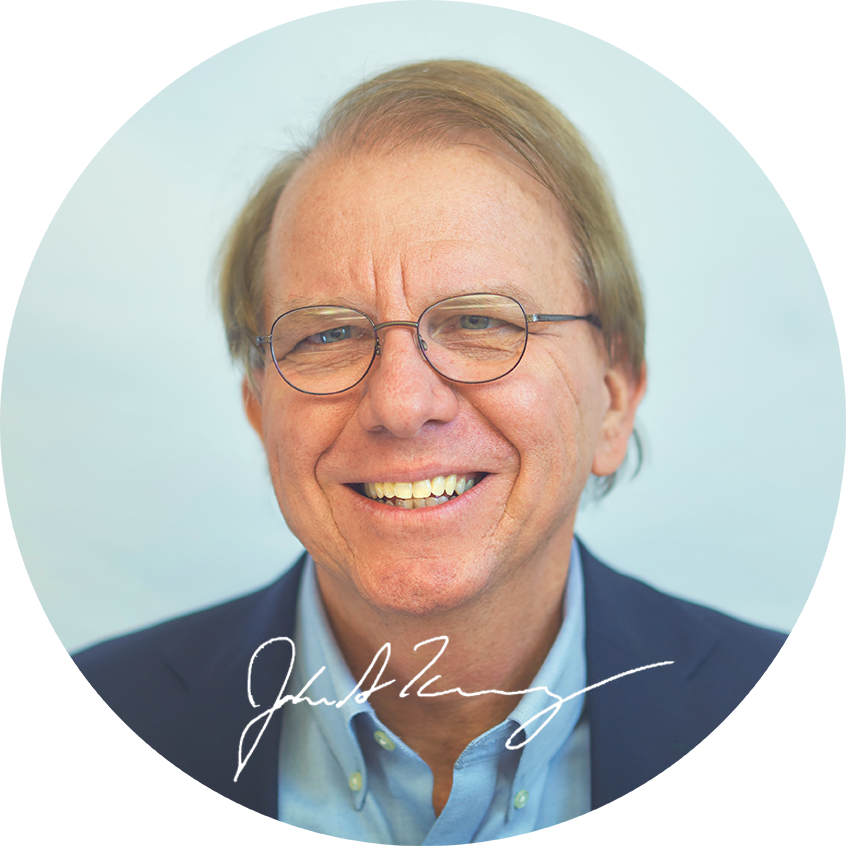 Getting your antigen to stand out in the crowd

Peptides: The Less-is-More Strategy for Success