Antibody Solutions has more than two decades of experience developing monoclonal and polyclonal antibodies to peptides that bind to the native protein containing the peptide domain.

Peptides are relatively short protein fragments that are used frequently as antigens either because of their own biological functions (Substance P, endorphins), to follow intracellular signalling states (e.g. phospho-peptides) or as surrogate of their parent proteins. The latter strategy is often chosen when an antigen is limited but its peptide sequence at least partially known. It also may be used to focus the antibody response to a specific domain of a larger protein. Through careful screenings, antibodies raised against a synthetic peptide(s) can be identified that bind to the whole protein.

Antibody Solutions has a proven track record in designing peptides that were successfully used for raising antibodies that bind to native protein domains. In addition, we have used peptide antigens to produce therapeutic antibody candidates that progressed through clinical trials.

Use of a linear peptide to obtain hybridomas producing an Abs that binds to a cell surface antigen (e.g., Hyb Lib Peptide 4). 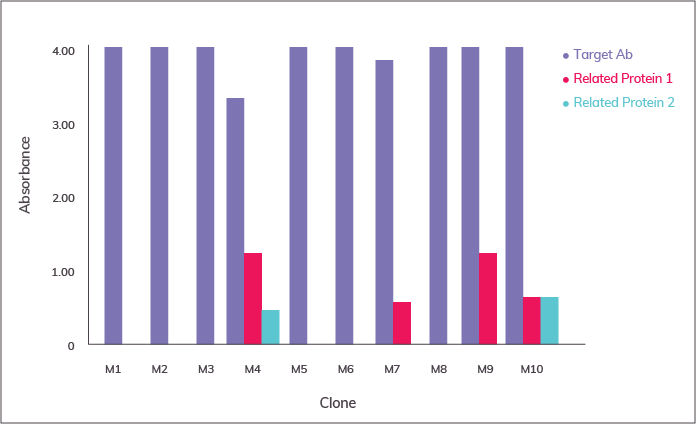 Use of a linear peptide to obtain clones producing antibodies that binds to the native soluble target protein and not to related proteins 1 or 2 with high sequence homology to the target protein.